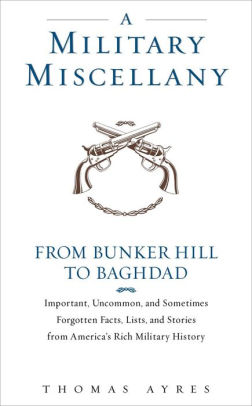 For armchair generals, history buffs, and military enthusiasts everywhere, A Military Miscellany is an essential and entertaining collection of fascinating and little-known facts, anecdotes, lists, and stories from  America's rich military legacy. Forgotten heroes, amazing blunders, surprising trivia, and strange-but-true stories overlooked by historians, it's all here in a book that will enlighten and amaze even the most avid student of American military history.

Did you know that American soldiers have been sent to invade foreign nations or their territories more than 200 hundred times since Thomas Jefferson dispatched troops to North Africa in 1803 to punish Muslim pirates? Or that during the Vietnam War a can opener was called a John Wayne? Or that a downed World War II airman once trekked across Germany, through occupied France, and across the mountains into Spain to avoid capture--only to be treated as a spy because Allied military intelligence said it couldn't be done.

Open this book anywhere and you'll find yourself instantly captivated. From the "peace president" who was our most frequent practitioner of gunboat diplomacy to the Revolutionary War hero whose refusal to cut his hair set off a four-year rebellion that went all the way to the White House, there's plenty of fascinating lore here--from the monumental to the trivial--in an indispensible encyclopedic work that takes up where ordinary history books leave off.