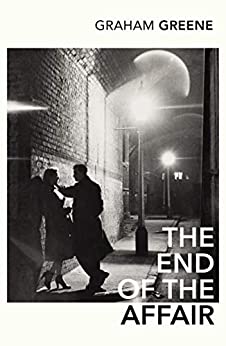 The End of the Affair

Graham Greene’s masterful novel of love and betrayal in World War II London is “undeniably a major work of art” (The New Yorker).

Maurice Bendrix, a writer in Clapham during the Blitz, develops an acquaintance with Sarah Miles, the bored, beautiful wife of a dull civil servant named Henry. Maurice claims it’s to divine a character for his novel-in-progress. That’s the first deception. What he really wants is Sarah, and what Sarah needs is a man with passion. So begins a series of reckless trysts doomed by Maurice’s increasing romantic demands and Sarah’s tortured sense of guilt. Then, after Maurice miraculously survives a bombing, Sarah ends the affair—quickly, absolutely, and without explanation. It’s only when Maurice crosses paths with Sarah’s husband that he discovers the fallout of their duplicity—and it’s more unexpected than Maurice, Henry, or Sarah herself could have imagined.

Adapted for film in both 1956 and 1999, Greene’s novel of all that inspires love—and all that poisons it—is “singularly moving and beautiful” (Evelyn Waugh).
Literary Fiction